Written Statement to the United Nations 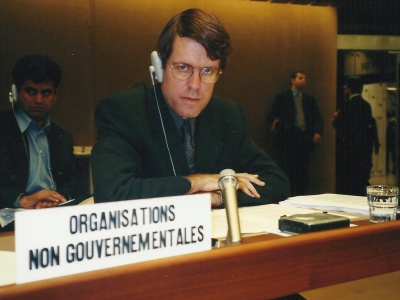 This document is now part of the official record of the United Nations, the only known United Nations document to affirm males’ right to genital integrity (first link) : http://ap.ohchr.org/documents/alldocs.aspx?doc_id=7400

TRADITIONAL PRACTICES AFFECTING THE HEALTH OF WOMEN AND THE GIRL CHILD

Written statement submitted by the National Organization of Circumcision Information Resource Centers (NOCIRC), a non-governmental organization on the Roster

3. Article 13 of the United Nations Charter, as well as Article 2 of the International Covenant on Civil and Political Rights and Article 2 of the Convention on the Rights of the Child bar discrimination on the basis of sex. Article 7 of the Universal Declaration of Human Rights provides, “All are equal before the law and are entitled without any discrimination to equal protection of the law.” Ms. Gay J. McDougall, as the Sub-Commission’s Special Rapporteur on Systematic Rape, Sexual Slavery and Slavery-like Practices During Armed Conflict, stated:
That international humanitarian law, insofar as it provides protection against rape and other sexual assaults, is applicable to men as well as women is beyond any doubt as the international human right not to be discriminated against (in this case on the basis of sex) does not allow derogation. 1/
Males may not be discriminated against in the application of human rights principles. United Nations experts have acknowledged that at least under certain circumstances male circumcision constitutes a human rights violation. 2/

4. The Parliament of Sweden recently voted decisively, 249 to 10, in favor of Law 2001:499, new legislation which regulates male circumcision and also ordered a study to determine-among other things–whether the new law adequately protects children’s human rights. Many Swedish Members of Parliament stated that male circumcision violates children’s rights. The 10 dissenters in the Swedish vote objected only because they supported total criminalization, rather than mere regulation, of non-therapeutic circumcision of male children.

5. Male circumcision has been stated to be a human rights violation by legislators, non-governmental organizations, and scholars. Germany awarded political asylum to a Turkish man based on his fear of enforced circumcision: “There may be … no doubt that a circumcision which has taken place against the will of the person affected shows a violation of his physical and psychological integrity which is of significance to asylum.”

6. Numerous researchers have comprehensively documented the broad range of physical and psychological harm caused by male circumcision, including infant pain response, serious harm to infant neurological development and memory capability, the damage caused by memories of the procedure, the damage caused to self-esteem and body image, post-traumatic stress disorder, permanent impacts on sexuality, and death. Reports of death during initiations in the developing world have been appearing frequently in major press outlets. On August 6, for example, the New York Times ran a story mentioning that at least 35 boys have died already this year in South Africa, and ten percent or more of initiates are left with no penis or just disfigured stumps.

7. NOCIRC notes that male circumcision is a very pervasive practice throughout both the developed and developing worlds. An estimated 13.3 million male children and babies are forced to undergo male circumcision without medical indication each year. As a numerical frame of reference, 2 million females undergo some form of female genital mutilation annually. In the developed world, the procedure is typically carried out at infancy, while in the developing world it occurs any time between infancy and early adulthood depending on various factors.

8. The fact that a newborn baby can suffer pain has been conclusively proven. The harm that male circumcision causes to babies by the severe levels of pain has been repeatedly documented. The level of response to the pain and stress of the procedure exceeds the response to blood sampling or injections and is not significantly reduced even by application of an anesthetic. Male circumcision harms women by impairing infant-mother bonding and breastfeeding.

9. Non-therapeutic male circumcision does not have any significant medical benefits justifying its routine performance upon a child. Every national medical association in the world which has considered the issue has refused to endorse routine male circumcision. Respected opponents of female genital mutilation have also questioned male circumcision and have pointed out analogies between the two practices and between false beliefs surrounding and justifying the perpetuation of the two practices. Recent research demonstrates that the average male circumcision in the developed world removes over 50% of all surface genital tissue and also a highly significant number of specialized neural end organs including extremely specialized tissue unique to that part of the body and fundamental to human sexual response. Research documents the long-term harm which many men experience as a result of male circumcision.

11. Complications in the developed world occur with a frequency of between 2-5% or more depending on the definition applied. A significant number of deaths occur each year. One study of male circumcision in the developing world found that 9% of the boys died, 52% lost all or most of their penile shaft skin, 14% developed severe infectious lesions; 10% lost their glans penis, and 5% lost their entire penis. This represents only those boys who completed travel to the hospital. The true complication rate is likely to be higher.

12. While supporting Mrs. Warzazi’s admirable work on traditional practices specifically affecting women and the girl-child, NOCIRC respectfully requests that the Sub-Commission also focus attention on traditional practices which specifically affect the male child such as male circumcision. NOCIRC notes that the International Covenant on Civil and Political Rights, the Convention on the Rights of the Child, and other relevant treaties are applicable both to males and females, and that discrimination against either gender in their application is forbidden.

14. Any alteration of children’s genitals performed without absolute medical indication violates human rights. Male circumcision violates the International Covenant on Civil and Political Rights, the International Covenant on Economic, Social and Cultural Rights, the Convention on the Rights of the Child, and other documents. Relevant rights include the rights to security of the person, to the highest attainable standard of health, and to protection from “all forms of physical or mental violence, injury or abuse, neglect or negligent treatment, maltreatment or exploitation, including sexual abuse.” Article 24.3 of the Convention on the Rights of the Child calls on states to “take all effective and appropriate measures with a view to abolishing traditional practices prejudicial to the health of children,” terminology which-as human rights scholars such as Jacqueline Smith have commented- is fully applicable to male circumcision.

17. NOCIRC asks that the Sub-Commission undertake a study of male circumcision as a human rights violation.