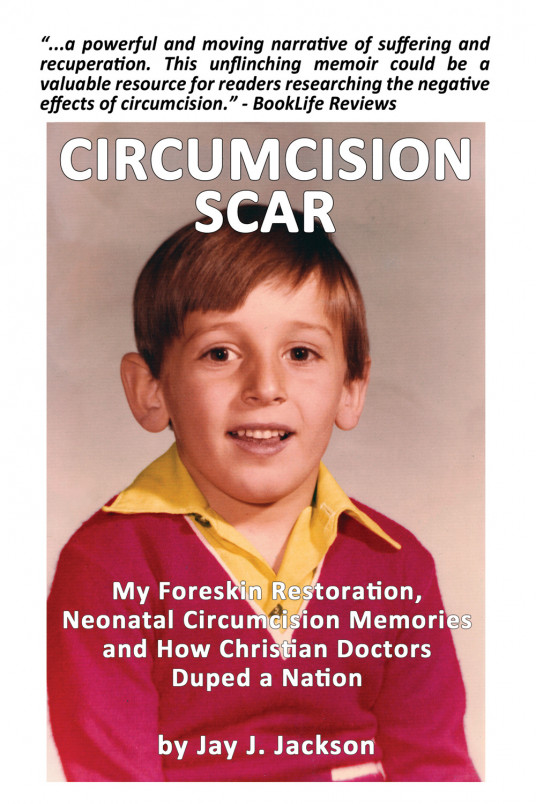 “It’s clear my circumcision didn’t just hack my prepuce, it gashed my psyche.”

In 2014, well before Jay J. Jackson authored Circumcision Scar, Lindsay R. Watson published Unspeakable Mutilations: Circumcised Men Speak Out, a collection of 50 men’s stories detailing the lifelong harm they suffer from childhood genital cutting to which they did not consent.

In that landmark book, Watson wrote:

“[T]he process of grieving for a lost foreskin closely parallels the experiences of those who have suffered amputation, rape, body dysmorphic disorder, the death of a loved-one, or delayed post-traumatic stress. Circumcision advocates assert that the pain of circumcision is trivial and momentary; these accounts show that the pain of foreskin loss may last a lifetime.”

Now comes another landmark book recounting the singular life experiences of circumcision sufferer Jay J. Jackson. Jackson, a virtual ‘canary in the coal mine’ of circumcision, offers intensely personal and oftentimes gut-wrenching insight into the lasting harm of imposing onto boys’ bodies the American custom of genital cutting. Circumcision Scar not only reveals Jackson’s history of recurrent nightmares and an emotionally painful journey of foreskin restoration to regain his genital integrity and take back his body from the circumciser, but also exposes multiple infuriating encounters with medical ignorance, arrogance and callousness, as well as the unrestrained power that both medicine and religion can exert over the most intimate aspects of our lives.

Through all of this, Jackson still manages to pepper his memoir with humor (I particularly enjoyed the surprising tale of his loving husband’s ‘unorthodox’ bris).

Circumcision Scar asks hard questions and is recommended reading for any man circumcised as a child who has ever pondered, however fleetingly, whether this unnecessary surgical alteration was done ‘for’ him or ‘to’ him. In a sense, Jackson’s journey is every man’s journey who was genitally cut as a child.

When considering foreskin restoration surgery, Jackson shares his belief that it “..was about the freedom to be who I was born to be without others forcing their will upon me – we gay people tend to be a little sensitive about that one.”

Based on my two surveys of more than 1,500 men documenting adverse long-term consequences of childhood circumcision, I believe Circumcision Scar will strongly resonate among all affected men, but especially so among circumcised gay men who have very intimately witnessed the functional differences between themselves and their intact partners and who have become acutely aware of this unjust loss of bodily integrity and genital autonomy.

Politically aware LGBTQ readers will surely recognize the intersectionality of homophobia and prepucephobia (fear of foreskin) and the parallels between gay rights and children’s rights when it comes to balancing the forces of medicine and religion against our need for control over our bodies, our sexuality and our lives. Jackson skillfully argues why true gender equality can never be achieved until society respects the genital autonomy of all children—regardless of sex or gender.

To those capable of connecting the dots, Circumcision Scar offers undeniable insight into why children’s genital autonomy belongs on the agenda of the LGBTQ movement, whose aim it is to secure greater individual choice in all matters pertaining to our bodies, our personal privacy, our sexuality and our basic human rights. Indeed, Jackson questions, “How do women reconcile asking people to support their right to dictate what happens to their own bodies, then turn around and deny their own sons the same liberty?” He continues “Once equality stops being a two-way street it stops being equality.”

Jackson’s Circumcision Scar is a testament to the author’s heroic and courageous persistence to heal and to be heard, as well as to resistance and the refusal to be silenced.

Circumcision Scar is available on Amazon at:
https://www.amazon.com/Circumcision-Scar-Foreskin-Restoration-Christian/dp/1734555807

…or directly from the publisher at:
https://www.circumcisionscar.com/